An article in the New York Times (June 15, 2008) suggested that men might be well advised to take finasteride (Proscar) every day to prevent prostate cancer.I believe that important, unanswered questions remain about the safety and efficacy of finasteride for prostate cancer prevention. I currently do not recommend its off-label use for prevention to my patients. 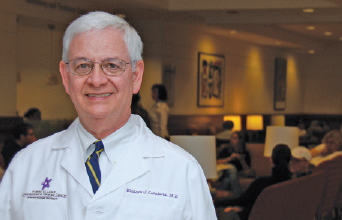 The Medical Letter, the most highly respected source of unbiased information on drugs, concluded about finasteride: "off-label use of finasteride might prevent prostate cancer, or it might prevent diagnosis of the disease while it is curable. Whether the drug causes a higher incidence of high-grade disease or just makes it easier to find is not clear. Until more data become available, the conservative course would be ot to take it." (June 30, 2008)

The PSA levels in men taking finasteride for the treatment of benign prostate enlargement usually decrease by 30% to 70% after one year and even more after more prolonged treatment.

The Prostate Cancer Prevention Trial was conducted to test whether finasteride could prevent prostate cancer over a relatively short 7-year study interval. A prostate biopsy was recommended for men with abnormal PSA or abnormal digital rectal examination screening results during the study.

Overall, the incidence of prostate cancer in men who received finasteride was 25% lower, a seemingly good result. But a surprising and alarming 26% increase in high-grade tumors (Gleason score of 7-10) was reported for those on finasteride who were diagnosed with prostate cancer.

In reviewing what happened during the study that might account for this surprising result, it became apparent that fewer biopsies had been recommended and performed for "abnormal" PSA results in the group taking finasteride. Also, among men who were advised to have a biopsy, those taking finasteride had a lower compliance rate, presumably because their PSA levels had decreased on finasteride.

Other Findings Should Cause Concern

Overall, among the men who were recommended and agreed to have a biopsy because of PSA or digital rectal examination findings, 26.5% in the finasteride group were diagnosed with prostate cancer as compared with 29.5% in the placebo group.

And some men in the finasteride group did not agree to a biopsy because their PSA had lowered, another reason for concern not considered in the Study conclusions.

This far lower 10% difference (3 divided by 29.5) in cancer incidence in the men who actually underwent a biopsy in a clinical setting where biopsies are normally performed because of an abnormal screening test is, in fact, not statistically significant for prevention of prostate cancer.

Study participants who never had abnormal screening tests during the study were offered "end-of-study" biopsies, and of those who were biopsied, 10% in the finasteride group and 15% in the placebo group were positive for cancer.

Not unexpectedly, the tumors diagnosed because of abnormal screening results were more aggressive and more advanced. But it is important that in the finasteride group, 48% were high grade versus 29% in the placebo group.

Of even more concern is that these "end-of-study" cancers would not have been detected at the time in a real-world setting where biopsies are only recommended when screening tests are considered abnormal.

The interpretation of the Prostate Cancer Prevention Trial has been widely debated.

The initial arguments for using finasteride were that by reducing the overall cancer detection rate, it might reduce the number of men diagnosed with prostate cancer and prevent unnecessary testing, biopsies, and treatment with its potential side effects.

These arguments resonate with certain segments of the medical community who are concerned that current widespread prostate cancer screening detects many cancers that would be best left undetected.

But in my interpretation of the study results, the arguments resonate wrong.

Finasteride reduces PSA levels to varying degrees in different men, making it difficult to track what the "true" PSA values are over time. Finasteride fails to reduce PSA velocity (increases) in men with high-grade prostate cancer and fails to induce objective responses in men with metastases.

Finasteride’s so-called "preventive" effects in the Prostate Cancer Prevention Trial occurred far too early and did not increase much over time.

One of the most appropriate conclusions to be drawn directly from the Prostate Cancer Prevention trial is that finasteride prevents PSA-prompted biopsies, not prostate cancer. And that situation can result in diagnosis and treatment of prostate cancer when it’s too late for cure.

A man who has benign prostate enlargement as well as not yet undetected prostate cancer – that is largely composed of low-grade cancer cells but also contains a small proportion of high-grade cancer cells – is started on finasteride therapy for cancer prevention.

Therefore, by the time the PSA begins to rise or reach the threshold for biopsy, most of the remaining prostate cancer is composed of aggressive, high-grade disease that has a less favorable prognosis.

In contrast, if this man were not taking finasteride, his PSA would not decrease but rather would continue to rise and reach the biopsy threshold sooner.

Moreover, men with a rising PSA would be more likely to comply with the recommendation for a biopsy, and the biopsies would be found to contain relatively more low-grade and less high-grade prostate cancer.

They reported that Gleason scores might be more accurate in the finasteride arm than in the placebo arm because a greater proportion of the prostate is being sampled.

Based upon the results of 25% of the study population who underwent radical prostatectomy, they then used statistical models to impute what the results might have been had all men undergone radical prostatectomy. By this questionable method, they arrived at the opposite conclusion – that finasteride actually did not increase the risk of high-grade prostate cancer but rather decreased the risk. They concluded that men aged 55 years or older have no need to be concerned about the risk of high-grade prostate cancer with finasteride.

Questioning Off Label Use

I believe that too many fundamental questions are still left unanswered.

Any treatment that reduces androgen effects is considered "hormonal therapy," because many, but never all, prostate cancer cells cease to proliferate or die when androgenic stimulation is substantially reduced.

A central question, therefore, is whether taking finasteride is true "chemoprevention" or whether it is merely a weak form of early hormonal therapy that masks and delays the detection of prostate cancer.

An alternative hypothesis to finasteride providing true chemoprevention of prostate cancer that is consistent with the available data is as follows:

In a clinical trial with longer follow-up (15 to 20 years), it is possible that "masking" high-grade prostate cancer with finasteride until it is too late for cure might outweigh any benefits from delaying or preventing the detection of lower-grade cancers.

If a prostate cancer chemoprevention study has a limited time span of 7 years, a delay in cancer detection would produce the appearance of a decrease in cancer incidence. However, with longer follow-up, this apparent benefit would substantially diminish or disappear.

Until further information is available, I recommend only the FDA-approved use of finasteride in men with severe symptoms from benign prostatic enlargement that have not responded to alpha-blocker therapy (such as Flomax) and want to delay surgical intervention for relief of urinary obstruction.

I warn them that finasteride might mask high-grade prostate cancer.

I recommend a prostate biopsy to rule out cancer before starting finasteride, and I recommend a repeat biopsy if the PSA rises while the patient is on finasteride treatment after I have ruled out other possible causes for the PSA increase.