The average adult has about 100,000 scalp hairs. While shedding up to approximately 100 of these hairs per day is considered normal, exceeding this amount can manifest in hair loss, causing considerable psychological distress for many affected individuals. The most common form of hair loss, or alopecia, is genetically determined (known as androgenetic alopecia, or male pattern hair loss) in which the hair recedes progressively, resulting in permanent baldness. Additionally, hair loss can be triggered by several factors, including childbirth, thyroid imbalance, nutritional deficiencies, surgery, extreme stress and menopause. But numerous drugs also are implicated in alopecia. It is important to recognize these drugs and distinguish the types of hair loss they can induce. 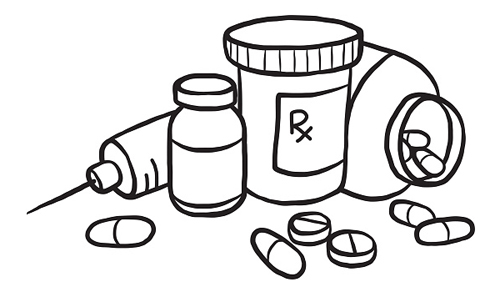 ach hair follicle (root) cycles through three successive phases. In the first phase, which can last from two to six years depending on genetics, the hair follicle is actively growing. Approximately 85 percent of scalp hair is in this phase at any time. The hair follicle pulls away from its blood supply and pauses growing in the second phase, which lasts about two weeks. Then, it becomes completely inactive and falls out in the third (or "resting") phase, which lasts from one to four months. Up to 15 percent of hairs are in this phase at any time. Some drugs can cause hair loss by interfering with this normal hair cycle.

The most common form of drug-induced hair loss occurs due to the premature transition of an increased number of actively growing hair follicles into the resting phase. Hair shedding becomes noticeable two to three months after starting the provoking drug. The hairs come out by the roots, resulting in hair thinning that is generalized, not limited to a certain area, and that does not progress to baldness or bare patches. The severity of hair thinning in these cases depends on the drug type and dosage as well as the patient's sensitivity to the drug. The good news is that hair loss in most of these cases is reversed once the trigger drug is identified and discontinued. However, it takes several months before the hair returns to its previous state, given the natural lag in the hair cycle.

The second type of hair shedding is almost exclusively seen with cancer treatments, such as chemotherapy drugs. These treatments have direct toxic effects on the hair follicles during their active (growth) phase. Hair loss begins much sooner — one to three weeks after starting the drug — and becomes most apparent at one to two months. As most scalp hairs are in the active phase at any given time, the resulting hair loss is extensive. Hair follicles resume their normal growth within several weeks of stopping treatment. However, hair color or texture alterations are possible.

A list of drugs commonly implicated in hair loss is presented in the table below.

No standard test can identify whether a particular drug is behind hair loss, but you may be able to identify a possible causal drug, based on when you started taking it and when hair loss began, if your health care provider rules out non-drug-related causes.

Hair loss often will stop on its own within four to six months of stopping a drug, with no other treatment necessary. This is the safest approach for handling drug-induced hair loss. For patients with persistent hair loss that does not improve after cessation of the provoking drug, some health care providers recommend topical over-the- counter minoxidil (ROGAINE, THEROXIDIL), which is available in 2 and 5 percent concentrations. However, minoxidil has not been studied adequately in, or approved specifically for, patients with drug-induced hair loss, so we advise against such treatment.

No drug can prevent hair loss due to chemotherapy. The FDA recently approved a "scalp-cooling" device for reducing the likelihood of chemotherapy-induced alopecia in women with breast cancer. These devices reduce blood flow to the hair follicles, ostensibly making it harder for chemotherapy drugs to damage them. Because it will take years before the long-term effectiveness and safety of these devices are determined, it is too early to recommend their use.

For healthy hair, avoid stress, treat any underlying disease and eat healthy, nutritious food with adequate amounts of proteins, vitamins, iron and zinc. If you suspect your hair loss is due to a certain drug, consult with your health care provider. Before the consultation, prepare a detailed account of all the medications that you were or have been taking within four months of the initial hair loss. Avoid products not approved by the FDA for treating hair loss, because their effectiveness has not been proven and they likely carry side effects.